A Brief History of Aikido 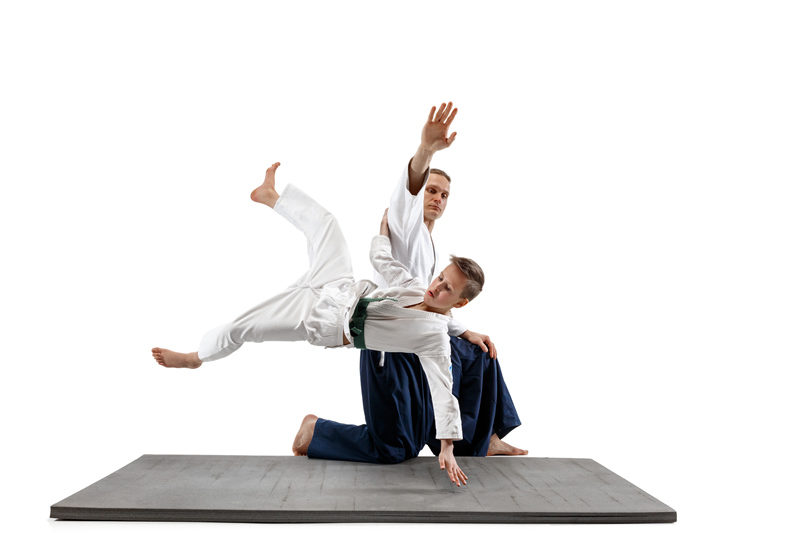 Aikido is a type of martial art that was developed in the early 1920s. It is classified as a martial art but with less focus on muscle development and strength. Its main focus is endurance and flexibility. This means that a person practicing Aikido is highly flexible while at the same time able to adapt to almost any aggressive situation they find themselves in.

Aikido was actively developed and tested in the 1920s by Morihei Ueshiba. He was also called O’Sensei or the ‘Great Teacher’. Aikido is often referred to as the ‘way of unifying yourself with life energy. At the time when Ueshiba was growing up, people in Japan were widely practicing Aiki-Jujutsu and other types of martial arts most of which employ aggression as well defense tactics. Ueshiba wanted an art where a person could defend themselves while at the same time not bringing harm to their attacker.

In the 1920s, Ueshiba started diverging from the popular and common Aiki-Jujutsu form of martial arts. He wanted art that embraced his new peaceful religious practices (Omoto-Kyo), his life philosophy as well as practicing martial arts. In the early years of Aikido, Aiki-Jujutsu terms and techniques were quite prominent but as the decades passed on, it became apparent to people all over Japan and the world over that Aikido is a different kind of martial art altogether.

This unique kind of martial arts involves entering and making swift turning movements which are designed to redirect and break the attacker’s movements. The Aikido practitioner uses a joint lock or throws to complete a move. As years passed on after the introduction of this art into society, people started seeing it as an art of combining one’s forces. Its focal point is to blend and unify well with the attacker’s physical as well as mental energy with an aim of nullifying their attack or intention peacefully or rather without getting anyone hurt.

A brief history of Morihei Ueshiba the O’Sensei

Morihei Ueshiba is credited as the founder and developer of the now popular global martial art called Aikido. He was born in Wakayama Prefecture, Japan on Dec 13th, 1883. In his early years, Ueshiba experienced many incidents just like any other young person then. This would eventually help him have a life vision that would help him and stand by his beliefs.

He did witness several aggression incidences which were directed against his father and he got a yearning to be all-powerful and protective of his family and himself. It is then that he started studying martial arts under renowned masters of the day. He perfected his martial art techniques in Sojitsu (spear fighting), Kenjitsu (sword fighting), and jujitsu (unarmed combat). This made him a dangerously trained expert in all the available martial arts of the day.

Even with the immense training in a wide range of martial arts, Ueshiba still felt that the skills he had acquired were inadequate to help him live a life which he desired. This is when he turned to the religion of Omoto–Kyo which emphasizes combining social-political ideals with Neo-Shintoism. The primary goal of religion is to help people become unified. Ueshiba then felt that he should teach people practical ways through which they can reach life’s goals through control and unification of the mind, physical strength, and spirits.

As Ueshiba narrated, the initial step towards the long and magnificent journey of Aikido was made when he was challenged by a naval officer into combat. With only a stick, he evaded every other mover the naval officer made against him. After a long battle in which the attacker was the officer, O’Sensei emerged winner after the officer dropped exhausted. O’Sensei said that for every move the officer made, he could see it even before it was executed.

Ueshiba started a dojo in 1927 in Tokyo where he started training students. Later on, he became the main instructor of his newly found Budo Enhancement Center. In its initial years, Ueshiba had to carefully select his students who would then be trained and allowed to practice Aikido. It wasn’t until the 1950’s that Aikido left its hatching grounds in Japan to reach other countries such as the United States of America.

In his lifetime, Ueshiba perfected the Aikido to a level where everyone can now practice it. Whether you are young, old, fat, thin, female, or male, Aikido is the one martial art that you can safely practice to gain agility while at the same time learn self-defense. It is especially fantastic to many people because they don’t have to harm the attacker. Ueshiba or O’Sensei passed on on April 26th, 1969 has given the world a great martial art.

The basic components of Aikido

When you learn Aikido, you will have a more peaceful life because you know you can handle almost any other physical attack on your person. You are also at peace because you are able to synchronize the energies of your mind, body, and spirit. This way your life becomes calm focused and with meaning. With many people struggling with excess body fat, Aikido can be seen as one of the ways to help them cut weight and keep fit.